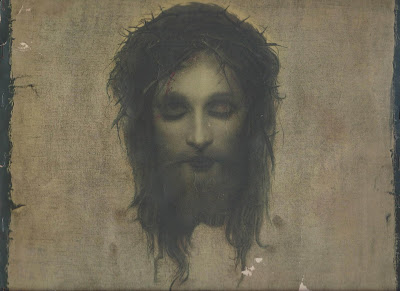 The first assignment of Sister Mary Killeen (then known as Sr Luke) as a teaching nun was to Our Lady of Lourdes National School, Goldenbridge. She was assigned one stream of First Class (out of four streams). When cleaning out the teacher's cupboard, she came across the above picture, and stuck it on the wall with blue tack, above the pencil-pairing machine. It does not appear to be a reproduction of the Shroud of Turin, but rather a reproduction of a painting of Gabriel Von Max (1840 - 1915), a Czeck painter, called "St. Veronica's Handkerchief."

A number of lithographic prints were made from the original painting. Our copy may be from a photo of a print by The House of Art, New York, c. 1950, hanging in the National Trust Museum at Mount Stewart, County Down.

Sr Luke's class was  found to be remarkably quiet and well-behaved.

It transpired that one boy, when pairing his  pencil, noticed that the face in the picture opened its eyes and looked at him.

He whispered his experience to his peers, and soon the whole class was in awe of the winking picture. Sr Luke knew nothing of what was going on, until the parents started coming into the class to see the "miraculous picture."

When she realised what was happening, Sr Luke took the picture down. I asked her for it and gave her one of my paintings in exchange (an oil on canvas-board of a poor man sitting on the steps of a Georgian tenement).

Donate to a project of Sr Mary

A Day in the Life of Mukuru

Sr Mary in the News

Sisters of Mercy in Kenya